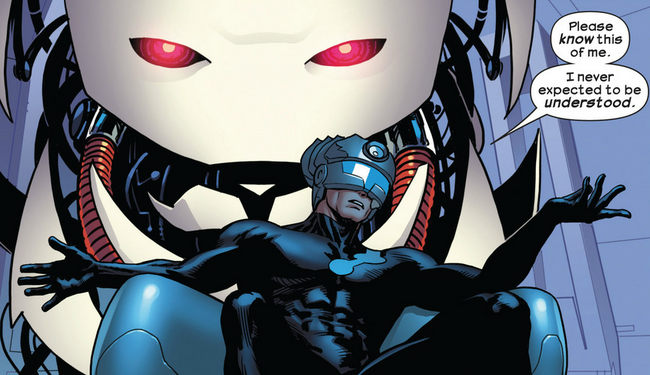 I've been a fan of Marvel for years, constantly making my own superheroes and writing stories. But it was only in late 2012 that I decided to make a new universe, with redone origins for characters, as well as some new ones. After talking with the Brotherhood of Fanfiction Writers (based on Marvel's Brotherhood of Mutants), the idea of us makig a wiki together to post our universes formed, and it eventually became an actual thing. I made the wiki, with Spidey-Jackson and Artemis Panther joining straight away. 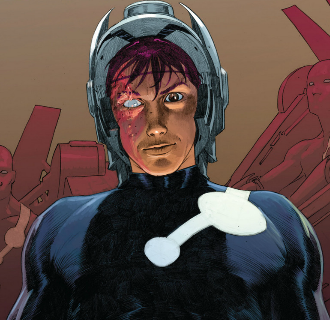 One of my all-time favourite comic villains: Reed Richards, AKA the Maker 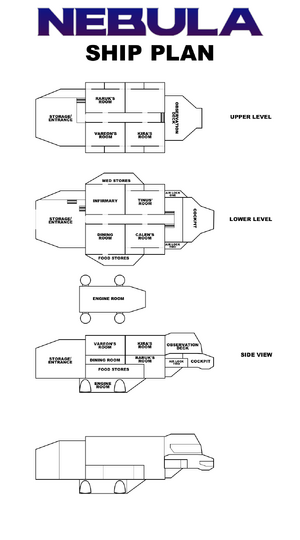 Fan fiction is quite limiting. You can write all the stories you want, with whichever characters you pick, but you're still using somebody else's universe to write them. It provides you with source material to work from, which in my opinion takes some of the fun out of it. I enjoy creating fan fiction, but I also like creating my own worlds, so I'm working on my own project now.

Nebula is a sci-fi series I'm currently planning and beginning the process of writing. It revolves around Calen and Raruk, two friends who assemble a crew and travel the Kutar Nebula, seeking adventure and earning money through shady dealings along the way. The crew live and travel aboard a spaceship refurbished by Calen and Raruk, called Nebula. Naturally, they get caught up in all kinds of shenanigans that they have to deal with, while also earning money and avoiding capture by the various law enforcement bodies.

There are 6 crew members aboard Nebula:

The series is inspired by works of science fiction such as Firefly, Star Wars and a little Guardians of the Galaxy, but it's set in its own universe, with its own characters, and its own history, all made by me.

In no particular order:

Notice the trend? I. LOVE. THE. ULTIMATE UNIVERSE! Earth-1610 FTW 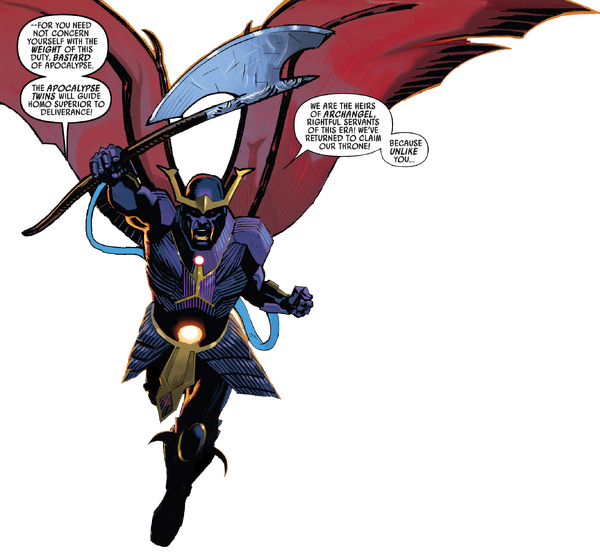 My all time favourite comic book contributors, in no particular order, and why.

Mark's work on the Ultimate Marvel line has been truly amazing. His reimagining of the Avengers has changed the way society views the team, and has been a major source material for the recent Avengers movie. If it wasn't for Mr Millar, my three favourite series wouldn't exist. His writing is great, and I'm glad Marvel chose him over anyone else.

What's that? Sorry, can't hear you over the sound of thousands of fans choking and dying. Oh, yeah. My list wouldn't be complete without the master that is Dan Slott. The most controversial move in comics books since...since...since they were invented. To be honest, he has guts. Because it's one thing to kill off such a beloved character, it's another to have them replaced with their mortal enemy (before you scream, I consider dear-ole Doc Ock his mortal enemy). But seriously, did you see that coming? It was a risky move, and he's standing by it. So am I. Quite frankly, fifty years is a long time for one person to be a youthful superhero. Spidey has to grow up, and Slott has done just that.

It's hard not to love a guy (in a family way) when they bring the amazing Mark Millar's work to a superior level. If it wasn't for Bryan's artwork, Ultimates 1 & 2 wouldn't be the same. The way he brought the characters to life, the way he made the surroundings as equally important, the amount of detail he used. It submerged the reader into the world of the Ultimates. A feat which a very small number of artists can accomplish.

One does not simply love the Ultimate Universe and not Jonathan Hickman. Jonny boy wrote Ultimate Comics: Thor, which pulled off both the technological and mythological side of Ultimate Thor that had made him so similar, yet so unique. It holds a permanent place in my Marvel Comics App on my iPad, something that only Ultimates 1 & 2 and the Guardians of the Galaxy series have achieved. Jonathan is a man of many wonders, who I consider to be one of Marvel's shining stars.

The second Dan on the list, Abnett is one of the two creators of my all-time second favourite superhero team, the Guardians of the Galaxy. And not the f***ed up 1969 team, the badass 2008 team. Along with Andy Lanning (next on the list), he wrote the Guardians of the Galaxy series which is my fourth favourite comic book series, because the Ultimates are...you know...ultimate. Not many people would think "Let's bring a human space-assassin, a genetically altered (talking) raccoon, two green skinned mercenaries and a tree together and make it a team."

How do I describe a writer for the Guardians of the Galaxy in a way that doesn't sound like a fangirl? Anyway, Andy Lanning is the second half of one of my favourite writing duos. His work is brilliant, and if you don't think so, you're dead to me. Guardians of the Galaxy is a masterpiece, that could have fallen on its own head if these two weren't behind the pen. I congratulate Marvel on their decision to bring him on.

Favourite works: Guardians of the Galaxy, War of Kings, Realm of Kings, Nova, the Thanos Imperative.

This guy, is a LEGEND! One of my all-time favourite comic book series, Uncanny X-Force, just wouldn't be what it was unless Good 'ole Jerome hadn't been a part of it. His work is great, and I'd have him pencil ALL my favourite comic series if I could. The way he brings the characters to life is a pretty amazing feat, especially when comic book artists try to keep the characters as human as possible, but far away as well. Jerome does just that, but gives them depth, it's brilliant!

Josh began writing Ultimate Comics: Ultimates starting with Issue 25. His first arc, 'Ultimates Disassembled' is one of my favourites! It takes science fiction to an awesome level, and is full of plot twists, interesting story arcs and (although not Josh's job) some truly amazing artwork. He also introduced Kang to the Ultimate Universe! I was so happy about that decision, especially when it was revealed she was none other than Sue Storm, which in my opinion was a great idea, and made a lot of sense.

With great power there must also come -- great responsibility!

"What you say is reasonable, logical, justifiable. But does that make it right?"

"Truth is a subjective concept, one to be accepted or rejected depending on the viewer's prejudices"

Oh you like to think you're a god, but you're not a god, you're just a parasite, eat now, jealousy and envy and longing for the lives of others, you feed on them, on the memory of love and loss and birth and death and joy and sorrow, so... so.... come on then, take mine. Take my memories, but I hope you've got a big appetite, because I've lived a long life and I have seen a few things.

I walked away from the last great time war, I marked the passing of the Time Lords, I saw the birth of the universe, and I watched as time ran out, moment by moment until nothing remained, no time, no space, just me. I walked in universes where the laws of physics were devised by the mind of a mad man. I watched universes freeze and creations burn, I have seen things you wouldn't believe, I have lost things you will never understand, and I know things, secrets that must never be told, knowledge that must never be spoken, knowledge that will make parasite gods bleed! So come on then, take it, take it all baby, have it, you have it all!

Run, you clever boy. And remember.

I'm not running away. But this is one corner of one country on one continent on one planet that's a corner of a galaxy that's a corner of a universe that is forever growing and shrinking and creating and destroying and never remaining the same for a single millisecond, and there is so much, so much, to see, Amy. Because it goes so fast. I'm not running away from things, I am running to them. Before they flare and fade forever. And it's alright. Our lives won't run the same. They can't. One day, soon, maybe, you'll stop. I've known for a while.

And one whacking great kick up the backside for the Silence! You just raised an army against yourself! And now, for a thousand generations, you'll be ordering them to destroy you every day. How fast can you run? Because today's the day the human race throw you off their planet. They won't even know they're doing it. I think, quite possibly, the word you're looking for right now is "Oops". Run! Guys, I mean us! Run!

Hello, Stonehenge! Who takes the Pandorica, takes the universe! But, bad news, everyone, 'cause guess who! Ha! Listen, you lot! You're all whizzing about. It's really very distracting. Could you all just stay still a minute, because I! Am! Talking!! Now the question of the hour is, "Who's got the Pandorica?" Answer: I do. Next question: Who's coming to take it from me? Come on! Look at me! No plan, no back-up, no weapons worth a damn! Oh, and something else I don't have: Anything to lose! So, if you're sitting up there in your silly, little spaceship with all your silly, little guns, and you've got any plans on taking the Pandorica tonight, just remember who's standing in your way! Remember every black day I ever stopped you and then, and then, do the smart thing: Let somebody else try first.

The universe is vast, never ending, lifeless throughout most of it. Anything we do won't have any effect on anything beyond our borders. But that doesn't mean we're worthless. Stars shift and expand, planets spin and explode, all the time. But it doesn't affect us, other people do. Our choices affect others, and that's how we live our lives. don't just sit there thinking you're worthless, because whatever you do, it'll affect everything on Earth, even if nobody notices.

In the darkest of nights, and the brightest of days, we can defeat evil in a million ways! Let those who work for the darkness not the light, beware the power, of PHOTONIC STRIKE

Nobody trusts me anymore! Not even the man on the street! And why would they? Adter you beat the hell out of all my enemies! You even killed one of them! That's something I'd never do, Otto! Never!

Of course not. 'Cause you're so busy being a "friendly neighborhood" Spider-Man. The funny guy. Trying so hard to make everyone love you! And what good did it do?! You took it easy on an old-time like the Vulture...and he got away! And when he came back, he was using young boys as his foot soldiers! Children! And what of Massacra?! You let him live last time...and when he returned, he killed over thirty people...including your friend, Dr. Ashley Kafka!

And thanks to your timely interference...I almost failed to operate on an infirm young girl! You tried to get in my way while I was saving her life! Why, Peter?!''

You were about to get the scanner. You'd find me. Know I was here. Couldn't risk...

You don't deserve to be Spider-Man. You understand that now. You're not worthy. You're nothing to me. Less than nothing.

Here are all the administrators of Comic Crossroads:

Community content is available under CC-BY-SA unless otherwise noted.

Ranked #9
on this wiki